Cell plasticity is a leading contributor to drug resistance 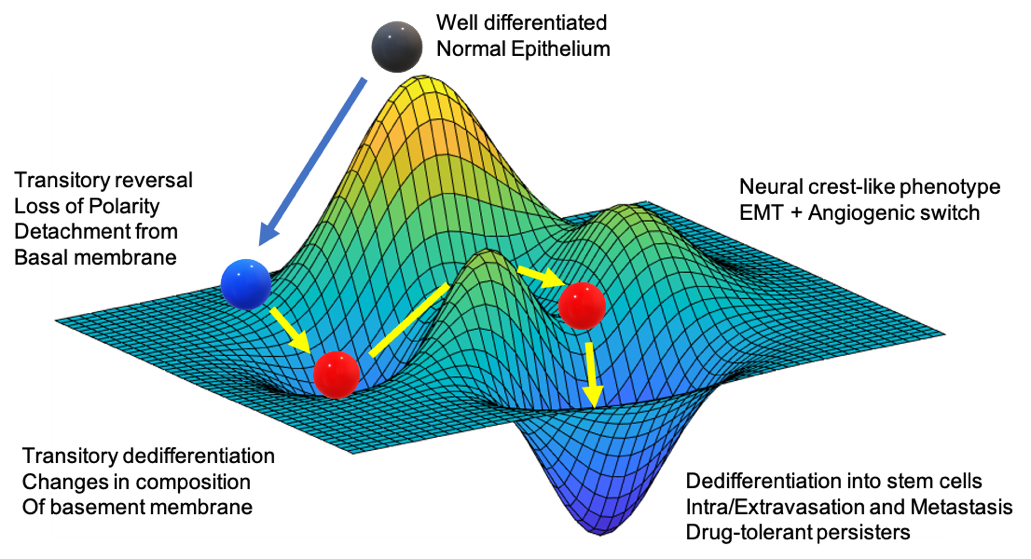 Tumor cells are constantly undergoing phenotypic switching that may or may not be dependent on the drug target and without additional secondary genetic mutations. 3 critical mechanisms are understood to be involved which are engaged more or less simultaneously. These are: Epithelial-to-mesenchymal transition (EMT), Dedifferentiation/Transdifferentiation, and Transient drug-induced tolerance.

EMT is characterized by both morphological and molecular changes characterized by loss of apical-basal polarity and epithelial cell junctions leading to changes in cellular composition of basement membrane, altering intra- and inter- cellular signaling, and eventually resulting in metastasis.

At the same time, distinct compartments of the epithelium maintained by different pools of resident stem cells begin to transdifferentiate or even reverse completely and dedifferentiate upon treatment. For instance, EGFR-driven NSCLC are observed to convert towards a SCLC phenotype upon EGFR inhibition and melanoma cells dedifferentiate progressively through transitory and neural crest-like states under BRAF inhibitor treatment.

Conventional approaches to drug repurposing are not equipped to handle the challenges of identifying synthetic lethal drug-target pairs. Signature-reversion principles or Guilt-by-association strategies used to uncover drug-drug or drug-disease similarity have yielded few successes due to large transcriptional differences between in vitro long-lived cell lines and in vivo tumor macroenvironment. Chemical similarity approaches have their pitfalls – errors in chemical structures as well as physiological effects that exist beyond the structural relationship limit the use for drug repurposing. Structure-based molecular docking virtual screens, for predicting drug-target pairs, are limited by lack of widespread availability of 3D protein structures for drug targets and poor predictability of target binding affinity. Pathway- or network-based approaches to integrate gene expression patterns, protein interactions and GWAS data help identify enrichment of drug targets but do not yield biomarkers that can be translated for patient selection. None of these approaches are designed to search for context-specific synthetic lethal targets. 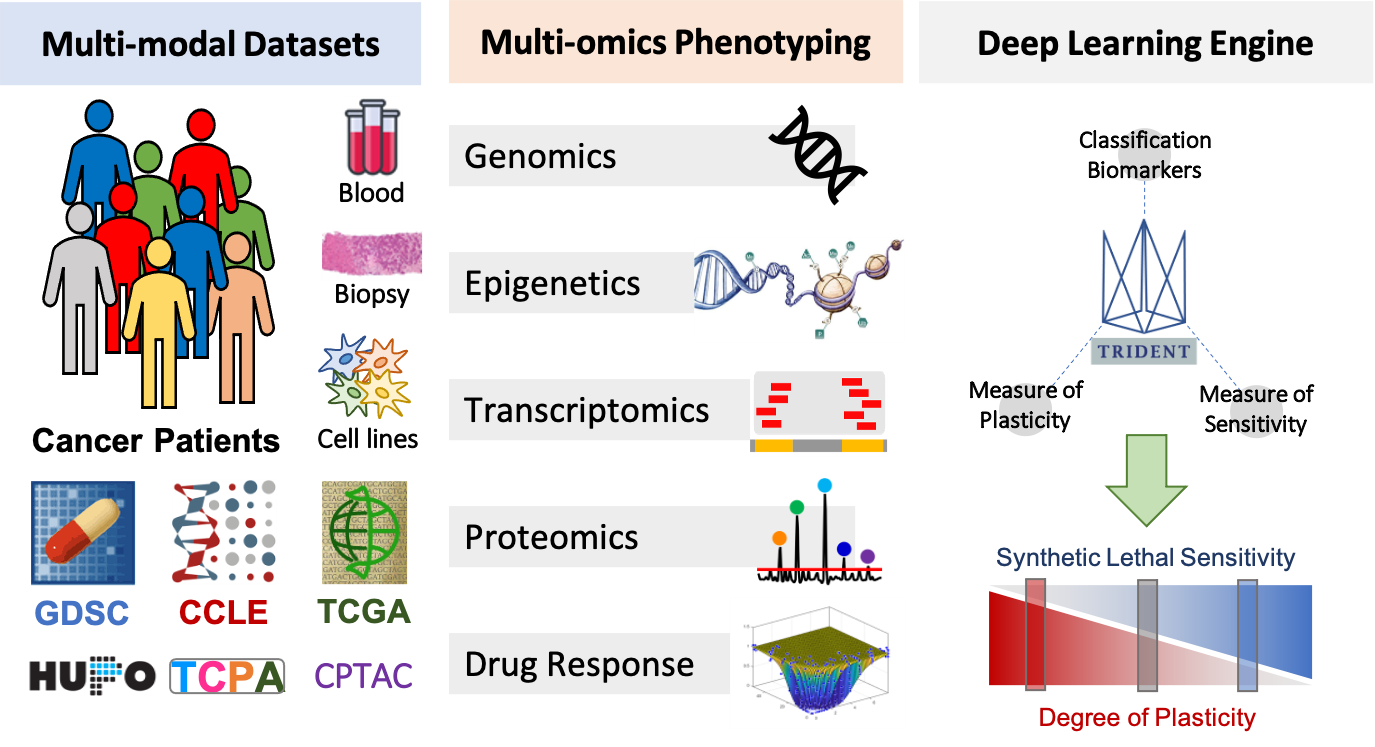 Trident, as the name suggests, takes a multi-pronged approach to address each of the leading causes of tumor plasticity as the disease progresses namely Epithelial-to-mesenchymal transition, Dedifferentiation/Transdifferentiation, and Transient drug-induced tolerance and sensitivity. The platform builds on a deep foundation of diverse multi-modal and multi-omic private and public datasets which include not only genomic and transcriptomic data from patient derived blood or biopsy samples and sublines, and pan-cancer epigenetic and transcriptional drug response data from The Cancer Genome Atlas (TCGA), Cancer Cell Line Encyclopedia (CCLE) and Genomics of Drug Sensitivity in Cancer (GDSC), but also human cancer proteome datasets from emerging global efforts that include Human Cancer Proteome Project (HUPO; Cancer-HPP), The Cancer Proteome Atlas (TCPA) and The National Cancer Institute’s Clinical Proteomic Tumor Analysis Consortium (CPTAC). Inclusion of proteomics data is very critical for identifying dynamical re-wiring of intra-tumoral signaling circuitry which is likely to missed if one looks at the genomic and transcriptomic level alone.

Trident is a Deep Learning Engine that integrates in vitro and in vivo epigenetic, transcriptomic and proteomic data characterizing genomic alterations, methylation states, cellular differentiation, and drug tolerance to identify:

Trident maps the phenotypic tumor transition from a high-dimensional landscape onto a quantitative, measurable one-dimensional scale

Trident traces the complex high-dimensional landscape of tumor progression to identify biomarkers that mark milestones in this continuum and enable quantification of degree of plasticity along the trajectory. Trident’s Deep Learning Engine trains a model that can reduce this high-dimensional information into a one-dimensional quantitative and measurable scale which informs what is the degree of plasticity in a biopsy sample or cell line dataset. Trident’s unbiased search in the vast repository of multi-modal datasets enables identification of synthetic lethal sensitivities that correlate linearly but contrast with degree of plasticity. This biomarker-guided, state-specific approach enables to successfully deconvolve signals from a heterogenous tumor biopsy into a discrete phenotypic state along a gradient of progressive and divergent cellular plasticity and complementary synthetic lethal sensitivity.

Trident is designed to deliver on Hillstream Bio’s ultimate goal, which is to identify and treat the right patients that are most likely to benefit from treatment. Using Trident, biomarkers measured in patient blood/biopsy samples will assist in determining the degree of plasticity for a specific patient, which will then directly inform about a patient’s sensitivity to activation/inhibition of the synthetically lethal target and probability of successful treatment. More than just de-risking clinical development, Trident aspires to deliver on the promise of precision medicine by building a platform based on the robust foundation of patient-based biomarker research and deep learning artificial intelligence technologies.